I found some squatters in my crawl space today. Freeloading vagrants who were living in my house without me knowing. How could they have moved in without me knowing? Usually squatters squat in a house that’s empty but these spineless vandals have no respect for property or privacy.

It’s a good thing most of them were dead.

Snails, centipedes, millipedes, and rolly pollies had moved in to my crawl space when there was a small pool of water. What must have seemed like a lake to them has now dried up leaving their equally water-free bodies to litter the desert of my crawl space. Only one large snail seemed to survive.

Of course not. Don’t be ridiculous. You’d move your anus and poop out of your shoulder, of course. Just like the snail did.

All mollusks – the squids, the octopi, the clams, the snails – can trace their family tree back to a common ancestor. We hypothesize that this ancestor looks like HAM (Hypothetical Ancestral Mollusca). This mollusk was snail-like with shallow conical shell. The wide opening of the shell allowed its alimentary system (the tube that starts with your mouth and ends at your other end) to be distributed how it is in many animals: mouth at one end and anus at the other.

Then Nature grabbed the shell of the snail and twisted it into an ice cream with a harder-than-candy shell (a process called torsion). As a result the opening through which everything happened (eating, pooping, crawling) got smaller. As the shell twisted, so too did its alimentary canal. The anus still needed to exit out the same, now smaller opening (because you don’t want to poop in your own backpack). The arrangement made the anus and mouth next door neighbors. If you’re looking for the anus of snail, look behind his head or just over his ‘shoulder’.

Maybe you’re having a hard time visualizing all of this. Or maybe you’re stuck in your backpack still trying to solve the riddle. Either way, I have more visual aids courtesy of an amber snail I found doing his business right there along the side of the road in Maine (such shameless little molluscs). You’ll notice his business is large proportional to the size of his body (far larger, proportionally, than anything any of your friends have bragged about).

Now that we know where the anus is, what about the snail’s breathing hole? Land snails have primitive lungs and breathe through a pneumatophore, his ‘nostril’. Real estate is tight so the snail’s ‘nostril’ is near the anus. In the picture below, the hole just above the, ahem, business, is his pneumatophore (follow the arrow). And no, I doubt he held his breath the entire time. He’s outdoors. It’s well-ventilated.

Amber snails have a relatively large aperture (opening) to their shells so they don’t evacuate on their heads, but many land snails do.

How about the penis! Behind the head. Vagina? Often next to the penis. Where else would you put it? Yeah, many snails, including the amber snail, are hermaphrodites. I used ‘he’ in the post because that’s the trouble with pronouns.

If you’re interested in your own alimentary canal and it’s adventures, then you should read GULP by Mary Roach. It’s a rootin’ tootin’ good time!

A periwinkle toast: May your tide be calm and the crabs be full. 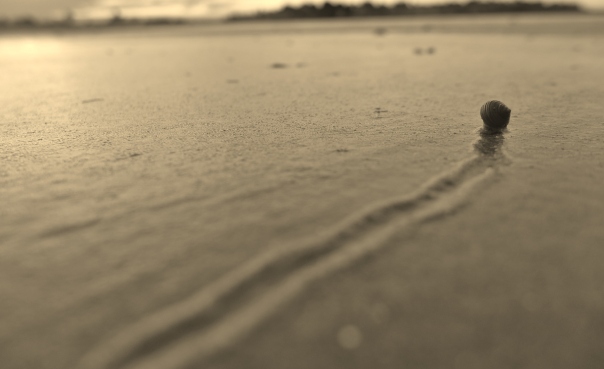 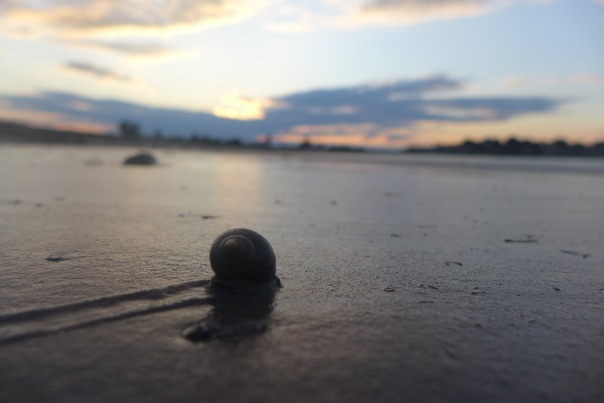 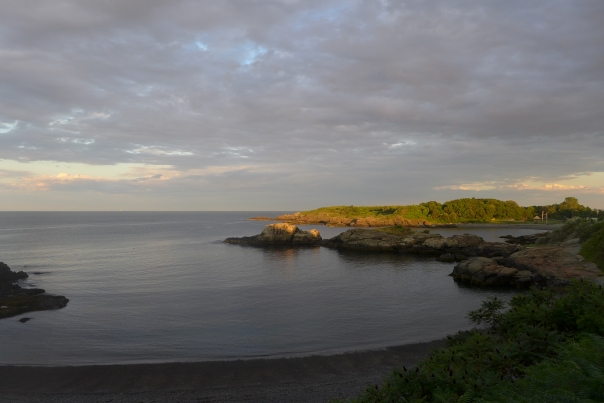 I have just returned from the New England Estuarine Research Society meeting in Groton, Connecticut (don’t be jealous). One of my students, Bethany Williams, gave a talk on the coffee-bean snail, Melampus bidentatus, and the effect of sea-level rise. I don’t want to give any spoilers, but as the salt hay in the Great Marsh is lost as sea-level rises, it could be bad news for the snail. But in sunnier news, Bethany, an undergraduate from Florida State University, gave her first talk ever and won best Undergraduate Oral Presentation! Very exciting! Congratulations Bethany! 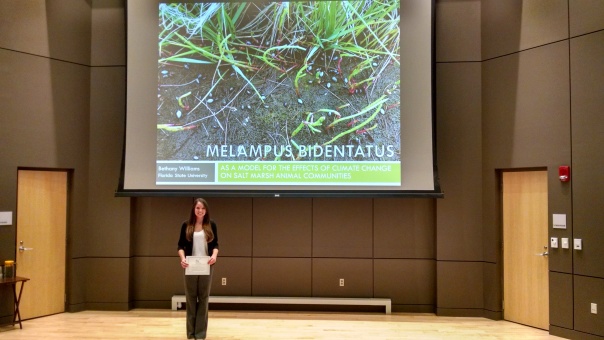 Below is time-lapse video of snails moving in and out of an abandoned footpath in the marsh. It demonstrates how snails avoid the path during the daytime heat, but when the temperature lowers and the humidity rises they gallop out from the grass to gobble the algae in the open. When the sun (and the heat) returns they ebb back into the grass. It’s a cool video that demonstrates potential impacts of climate change on these, turns out, sensitive snails. When Bethany’s thesis is complete, we’ll post more of the story. For now, enjoy the video.

If you are small of mass, gravity pulls on you very weakly. If you are small enough and a snail, you can spread your stomach-foot out wide and can take advantage of the water’s surface tension to walk on the ceiling.

But first you must get to the ceiling. This minute snail can simply crawl up the side of the pond bank or a plant stem. Or create a tiny bubble of air to carry it up to the water’s surface. Often they will do this when it gets to crowded on the bottom. How nice it would be to simply create an escape bubble anytime you were uncomfortable.

I cannot walk on water, on the surface or underneath, and my legs create tsunami sized waves relative to the tiny water-walker as I walk. The snail’s grip on the surface relinquished and it sinks awkwardly to the bottom, like a coin dropped in a bucket of water. Now it must decide how comfortable it is and whether to stay on the bottom, or rise to the top. 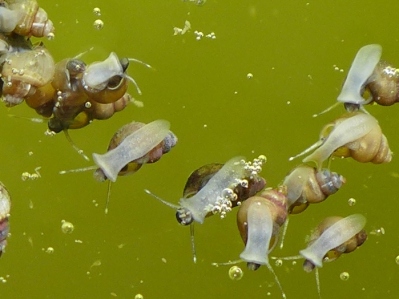 Hydrobiid snails crawling on the underside of the waters surface

Hydrobiid snails crawling on the underside of the waters surface

Hydrobiid snails in a petri dish. One on the underside of the water’s surface, the other on the bottom. 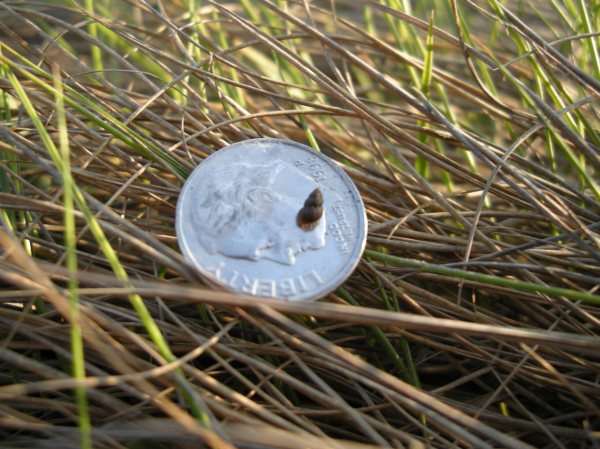 For those of you who haven’t seen it, here’s my article in the Daily News about how the coffee-bean snail survives a New England winter.

In salt marsh, this snail freezes to survive 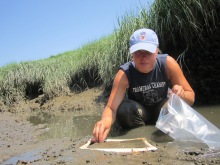 Harriet is simply thrilled to have her picture taken; especially when squatting in mud and plucking snails. 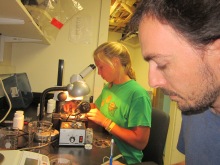 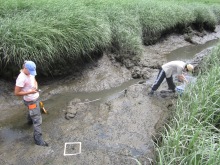 Harriet and Meghan Short (another of my mentees!) collect mudsnails in Rowley, Massachusetts 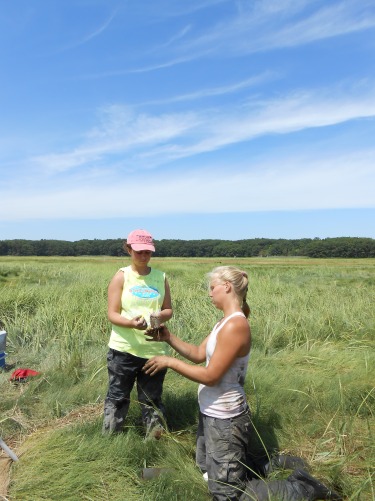 There are so many stories from the Great Marsh (the thumbprint of marsh bordered by the rocky shores of Cape Ann to the south and the sandy beaches of New Hampshire to the north) and it’s wonderful when they are written down.  The one below is from Harriet Booth, a recent graduate of Brown University, who also had the great pleasure of being one of my interns in the summer of 2012.  And bless her heart, not only did she survive a summer in the boot-sucking mud and pain-in-the arm, face, and leg flies, but she went on to write an honors thesis.  Recently, she wrote a wonderful blog post about her experience, some of which is excerpted below.  I particularly like “…a small snail, muddy-colored and roughly the size of a peanut, emerged from the edge of the plastic, making a bid for freedom across the mudflat.”  I encourage you to read the entire essay here.

Harriet is currently a Research Fellow at the Atlantic Ecology Division of the EPA in Narragansett, RI.  She is looking at the effect of ocean acidification on bivalves.  Way to go, Harriet!

“The square, plastic quadrat slapped down where I tossed it, splattering me with little droplets of mud.  As I bent down to examine the sampling area, I noticed one side of the small quadrat seemed to be moving slightly, lifted by some tiny but determined force.  I looked closer and watched as a small snail, muddy-colored and roughly the size of a peanut, emerged from the edge of the plastic, making a bid for freedom across the mudflat.  I watched this little guy trundle resolutely away from me, making slow but steady progress across what must have seemed to him, a vast expanse of mud.  His tiny antenna occasionally appeared from beneath the front of his shell, wiggling about and seeming to wave at me as I crouched in the creekbed.  Eventually, I picked the snail up and placed him back inside the quadrat, counting the rest of the remaining snails at the same time.  However enjoyable it was to watch these little creatures bumble around, I had many more quadrats to toss before making my own escape out of the sucking mud of the salt marsh.”