As a snail, you are cold-blooded (the scientific term is ectotherm), meaning that you can’t regulate your body temperature internally like those uppity warm-blooded animals (endotherms) like mammals and birds. Your outside temperature is your inside temperature. What happens when the temperature drops below freezing? How do you survive if you are no warmer than an icicle?

38 degrees Fahrenheit
Head south to overwinter in Mexico or the American south like the monarch butterflies, green-darner dragonflies, and not-so-hardy New Englanders? No, you are a slow-footed gastropod and travel only as far as the nearest plant.

36 degrees Fahrenheit
Bury yourself under leaves, moss and the soft soil like the forest and garden snails? There is no moss here. And the leaves are few and the mud is as soft as a cinder block.

Other snails join you at the plant. You all huddle into a cuddle puddle.

34 degrees Fahrenheit
Hibernate like a bear in a cave? Marshes, by their geologic definition of having no rock from which to carve a cave, have no caves. Some snails, if lucky, sneak into crab burrows and stowaway in a muddy hibernaculum. But the holes are few and the snails are many. And a burrow is just a hole and holes are cold.

33 degrees Fahrenheit
Fill your blood with antifreeze like some insects? That’s not a trick you can pull off. But you must do something because cold kills. It’s not the cold itself that kills, it’s the stiletto-sharp ice crystals that form inside your cells. Crystals shred the cell’s membrane and the nucleus and mitochondria spill out like guts from a disemboweled goat. A cell freezing is like stabbing a water balloon with a hundred toothpicks from the inside. Frozen cells die. Freeze enough cells and you die. Winter will kill you.

32 degrees Fahrenheit
Parts of your body start to freeze.

30 degrees Fahrenheit
The water in your body continues to freeze. But not the water inside your cells, the water outside your cells. The water between the cells. Because of osmosis, this pulls water out of your cells, which makes them saltier. Salty cells, like salted roads, lower the freezing point of water and do not freeze.

22 degrees Fahrenheit
It’s midnight. You heart has nearly stopped. Parts of your body have frozen, but your cells have not. You will survive another winter. But you will still be naked, carrying a big rock, and covered in goopy slime.

It could be worse; you could have a fish living inside your anus.

Post-script
Many marine snails use this ‘freeze part of my body’ trick to survive the winter. The snails starring in this essay are the coffee-bean snail, Melampus bidentatus, and the marsh perwinkle, Littoraria irrorata.

It’s 3:00 P.M. on Thanksgiving Day and I’m bored and slightly cold. We will eat at 4:30 P.M. I’m not sure what to do with myself so I’m sitting behind the couch using the box for the cat’s scratching pad as a mouse pad and writing a blog while my mother reads and my mother-in-law vacuums.

What to write about? Snails. A good go-to for me.

Two days ago when it was 60 F, I laid on the red-brick patio and watch a snail that I had dislodged from a planter that I moved. It had been hiding under there, probably to overwinter. But I brought it out into the open. It was nice just to watch the snail without any sort of agenda. So often in my science I’m making observations so I can scribble them down, analyze them, write a grant, get rejected by the grant, write another grant and finally give up and move on to another subject. Just like a football coach who points out the errors in the defensive line of a team he doesn’t coach, I can’t help but analyze Nature instead of just enjoying the game. My head instead asks, What species is it? How old was it? How big? How many are in the yard? What predators does it fear? But I let myself relax. I watched and I enjoyed. I watched the slide of its stomach-foot over the electric green moss that cushions the red bricks. While I didn’t take any data, I did take pictures.

And what will this snail eat for it’s Thanksgiving meal? It’s 43 F here today so it may be too cold for it to eat, but if it does feast, it will be on rotting leaves, mushrooms, and if it finds its way to my compost pile – the carcass of a Halloween pumpkin. Some meals don’t require basting.

By the way, if you haven’t read the beautiful book The Sound of Wild Snail Eating you should. It’s a wonderfully written book about a bed-ridden woman who befriends a woodland snail. 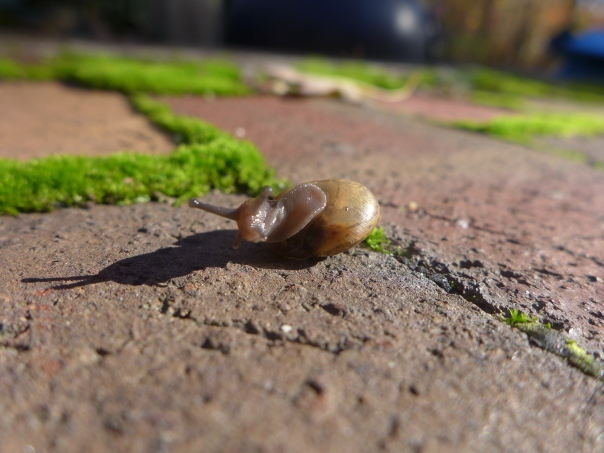 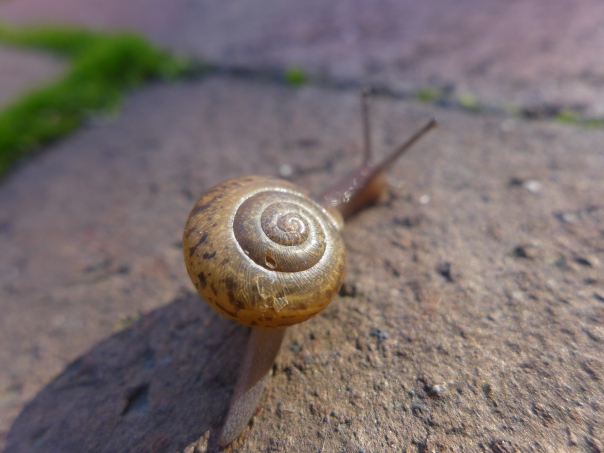 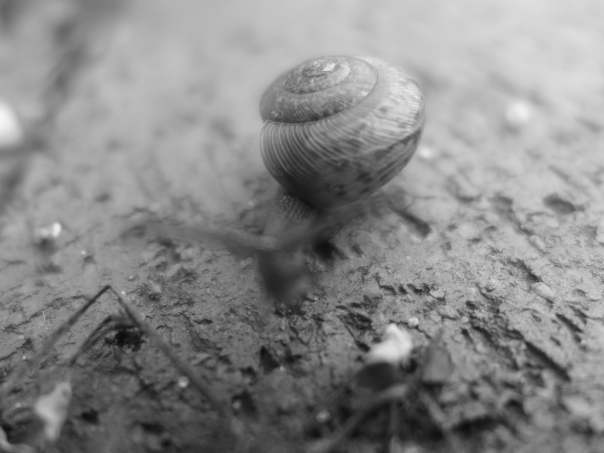 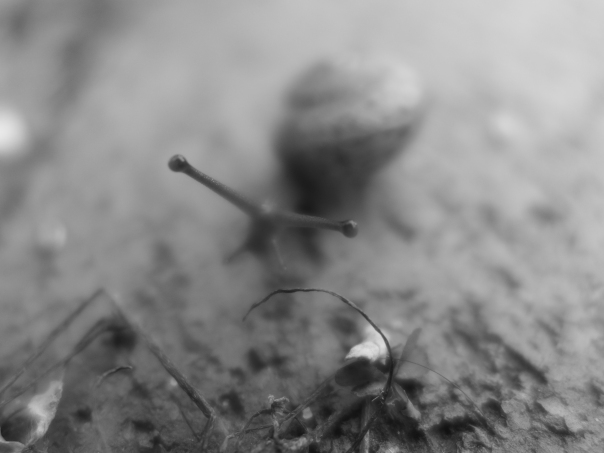 Of course not. Don’t be ridiculous. You’d move your anus and poop out of your shoulder, of course. Just like the snail did.

All mollusks – the squids, the octopi, the clams, the snails – can trace their family tree back to a common ancestor. We hypothesize that this ancestor looks like HAM (Hypothetical Ancestral Mollusca). This mollusk was snail-like with shallow conical shell. The wide opening of the shell allowed its alimentary system (the tube that starts with your mouth and ends at your other end) to be distributed how it is in many animals: mouth at one end and anus at the other.

Then Nature grabbed the shell of the snail and twisted it into an ice cream with a harder-than-candy shell (a process called torsion). As a result the opening through which everything happened (eating, pooping, crawling) got smaller. As the shell twisted, so too did its alimentary canal. The anus still needed to exit out the same, now smaller opening (because you don’t want to poop in your own backpack). The arrangement made the anus and mouth next door neighbors. If you’re looking for the anus of snail, look behind his head or just over his ‘shoulder’.

Maybe you’re having a hard time visualizing all of this. Or maybe you’re stuck in your backpack still trying to solve the riddle. Either way, I have more visual aids courtesy of an amber snail I found doing his business right there along the side of the road in Maine (such shameless little molluscs). You’ll notice his business is large proportional to the size of his body (far larger, proportionally, than anything any of your friends have bragged about).

Now that we know where the anus is, what about the snail’s breathing hole? Land snails have primitive lungs and breathe through a pneumatophore, his ‘nostril’. Real estate is tight so the snail’s ‘nostril’ is near the anus. In the picture below, the hole just above the, ahem, business, is his pneumatophore (follow the arrow). And no, I doubt he held his breath the entire time. He’s outdoors. It’s well-ventilated.

Amber snails have a relatively large aperture (opening) to their shells so they don’t evacuate on their heads, but many land snails do.

How about the penis! Behind the head. Vagina? Often next to the penis. Where else would you put it? Yeah, many snails, including the amber snail, are hermaphrodites. I used ‘he’ in the post because that’s the trouble with pronouns.

If you’re interested in your own alimentary canal and it’s adventures, then you should read GULP by Mary Roach. It’s a rootin’ tootin’ good time!

This work is licensed under a Creative Commons Attribution-NonCommercial-ShareAlike 4.0 International License.
Join 365 other followers