For my birthday a few weekends back (yeah, you missed it, but you can still send me a box of cash.  Small bills, please.), I went to Acadia National Park in Maine.

Saturday P.M.
I’ve made it to Acadia!  But before getting to my campsite I stop where Stanley Brook empties into the ocean.  It’s low tide.  The brook sheets across the sand in braided fingers around rocks and through the sand.  The rocks are covered in bright green algae; algae fed by fertilizers carried by the brook from lawns and golf courses.  My bare feet squish in the muddy sand.  The brook empties into a cove of Seal Harbor.  The cove is flanked by sand that grades into pink granite cobblestones and then larger rocks.  Rocks born from the granite mountains behind me.  The rocks are shaggy with rockweed (Fucus sp.) and knotweed (Ascophyllum sp.) .  I slip and fall on the rocks, only slightly cushioned by the seaweed.  I get up and walk between the rocks, careful to avoid the litter of shells from razor clams, blue mussels, and soft-shelled clams.  All wonderful species on the plate! 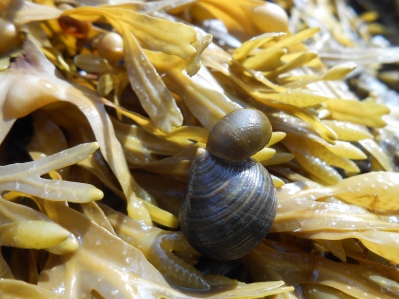 In the rockweed I find pimples of periwinkles.  These are the “common periwinkles” (Littorina littorea), but before 1860 I wouldn’t found these snails here.  These snails hitchhiked across the Atlantic from Europe on ballast stones that were left behind on the shores of Nova Scotia.  Today these invasive snails have marched their way down to Delaware Bay (they have widely dispersing larvae that ride currents).  These snails can be lightly boiled and using a small pin, removed, dipped in butter and eaten.  Don’t eat the operculum, the snail’s trap door on its foot.  I’ve not tried periwinkles so I don’t know if they’re delicious or not.

I find a fatty of a sand shrimp and try to take his picture but he’s not having it.  These shrimp are flattened dorso-ventrally (from top to bottom) so they can hug the sandy surface picking up tiny morsels of algae and animal bits with their crane-like arms.  If startled, a strong flick of the tail will send them rocketing backwards, at which time they can quickly bury in the sand.

Saturday evening
I arrive at my campsite ($20/night) at Blackwoods Campground.  My phone says it’s on International Roaming.  Hot damn!  No phone, no computer.  Just me and the woods (and other campers and hikers).  Holla!  After setting up I take a quick walk in the woods through the moss and maritime spruce firs.  Small red squirrels chitter at me as I walk.

Moss covered ground in Acadia, Maine
When walking in the woods I find I don’t observe much because I spend so much time looking at my feet so I don’t fall and bust my head open.  To be observant I have to stop, but when I hike it’s often about the destination and not the journey.  Fortunately, a pee-break forces me to stop and look at something I’d only seen once before.  Dolls eye plant, also called the more sinister, white baneberry.  In the late summer this plant produces white berries with black dots.  It looks creepy and tasty at the same time.  But don’t eat it! The entire plant is poisonous producing “gastrointestinal blisters” http://www.bio.brandeis.edu/fieldbio/medicinal_plants/pages/Dolls_eye.html. I got enough problems without  blisters in my tummy.

Sunday A.M.
It’s raining and I forgot my stupid rain jacket.  I read and sleep most of the morning.  I do drive into Bar Harbor.  It sucks.  Too many damn tourists.  Including yours truly.

Sunday noon
I’m sitting at Thunder Hole.  A place where the sea pushes against granite and the architecture here is such that the carved finger of a hole gets air trapped inside and when a rising tide pushes in it can geyser with a thunder.  I hear a gurgle and a glop but today I am not getting a geyser, no thunder.  I’m watching a raft of common eiders (Somateria mollissima), which are large sea ducks.  The group is made of molting males; whose plumages are ugly before they become beautiful for the ladies (breeding is a winter sport here).

The group is either a year-round population or migratory.  Common eiders nest and raise their young in the Arctic as soon as the ice opens up.  It’s a race against ice because chicks have to be born and grow to full-fledged flight for their migration south for the winter.  Which brings them to New England.  To an eider, New England is Florida.  As a southerner, there is nothing warm about a New England winter to me.  Among the sea ducks I see what looks like a lobster buoy.  Immediately half the ducks dive and the other half fly away.  Then the ‘buoy’ ducks below the surface.  A minute later it resurfaces.  It’s a grey seal (Halichoerus grypus) with an eider in its mouth.  It leans back, grabs the eider with its flippers and rips the duck in half.  Then it shakes it like a dog shaking a rabbit to skin it and then eats the duck in a few greedy chomps.  I didn’t get a picture, but here’s an image of similar duck carnage here:  Seal eating duck

Sunday Afternoon
Legs stretched and lunch eaten, I’m ready to conquer.  I’m looking at you Cadillac Mountain.  I walk past the dolls eyes and the mossy ground and up the granite dorsum of the south slope.  The ascent is gentle but I don’t make it all the way to the top because a fierce north wind makes it too cold.  On the way back I pause to admire a mountain lake.  I’ve never seen a mountain lake, or at least viewed one from above as it was nestled in the crook of a mountain.  I wonder what life lives there and nowhere else?

Sunday night
There’s an eyelash of a moon out tonight so the stars are still bright.  I’m tired and I don’t make a fire because I don’t want to fight with it or I don’t want to wait for it to go out.  This is good because there is a small opening in the canopy of trees around my campsite.  This opening allows me to look at the stars; it is my own viewfinder to the sky.  So I lay on the picnic table for a few minutes.  I don’t know my constellations, but it’s nice to look at the stars and see them looking back at me.

Monday morning
I return to Stanley Brook and the cove it empties into.  A ringed-bill gull shares a blueberry muffin with me.  A herring gull, a larger bird, harasses the ringed-bill and ‘shares’ the muffin with me too.  The upland edge of the beach is littered with a lot of young blue mussel shells, like long, dark and discarded fingernails.

Later Monday morning
I return to Thunder Hole, determined to see it spout.  But I don’t see it.  Instead I lay on belly on an exposed blanket of barnacles and look closely in the tide pools.  The stillness of the water belies the activity of this mesocosm of the ocean.  Submerged barnacles sweep furiously with their cirripedia, legs fashioned like sieves, to strain the water for food.  Isopods dart about, maritime springtails float on the surface of the water like small silvery pills.  Predaceous snails take advantage of the sedentary prey of barnacles and blue mussels.

I sit up.  The blue water bleeds into the blue sky.  My view is entertained by a lobster boat that pulls up to a buoy and fishes the trap.  There is no wasted energy on this boat.  All movements are efficient by the two lobstermen; all for the goal of a funny-looking crustacean that shuffles like a tank – Maine lobster.  Hook the bouy, pull up the trap, pull out the lobsters, re-bait the trap and drop it back in for another soak.  It takes maybe five minutes at each trap.  Travel time is what takes the longest it seems.

Monday afternoon
I climb Beehive, which is a mountain only 550 feet in elevation but it’s straight up.  I read the warning sign that says I could die and say, yeah, I want to do this.  It’s like a jungle gym with steel bars bored into the rocks for climbing and not dying.  No rock to walk on?  No worries, we put down a steel grate for you.  Awesome! 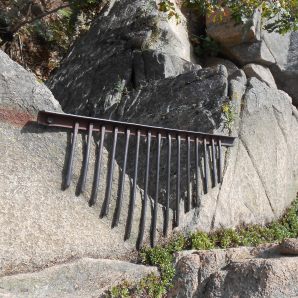 The view from the top of Frenchman Bay is inspiring.  In the bay, there is a galaxy of lobster buoys with lobster boats wending along their own constellations.  Wisps of horsehair cirrus clouds hang in the sky.  I meet Gail and Yox, a retired couple from Virginia, very friendly.  Yox says, “It’s beautiful here.  Every other day is a great day and all the other days are just good days.”  That’s a wonderful phrase I hope remember on those not-so-great days.

I walk to The Bowl, another mountain lake.  It’s surrounded by narrowleaf goldenrod and quaking aspens.  The red maples at the edges have just a blush of red.

Onward up to Champlain Mountain.  More spectacular views, but my body is tired and I’ve got to walk back down so I don’t linger at the top.

Monday evening
I have a simple supper of more peanut butter and Nutella sandwiches and half of a row of Chips Ahoy cookies.  I get in the car and head south to Massachusetts.  When I get into cell phone range there are many birthday messages.  And that’s enough to get me the 4.5 hours back home.